Pull up a seat and sit a spell. Master storyteller Joe R. Lansdale has cooked up a passel of tales for you about the unlikeliest duo East Texas has to offer.

Hap Collins looks like a good ol’ boy, but from his misspent youth on, his best compatriot is Leonard Pine–black, gay, and the ultimate outsider. Inseparable friends, Hap and Leonard attend family gatherings, climb into the boxing ring, get in bar fights, and just go fishing–all while confronting racism, righting wrongs, and eating copious, delicious food.

Chock full of Lansdale’s unique blend of humour, ferocity, and insight, Of Mice and Minestrone delivers five never-before-seen (plus one perhaps familiar) Hap and Leonard stories, a selection of the boys’ favourite recipes, and an introduction from New York Times bestselling author Kathleen Kent.

So come discover the legends of Hap and Leonard, created by Joe R. Lansdale his own self, and featured in the by Hap and Leonard TV series starring Michael K. Williams (The Wire), James Purefoy (The Following), and Christina Hendricks (Mad Men).

[I MUST HAVE BEEN SIX or seven at the time, and it was an event that went on for years, this gathering of relative – THE KITCHEN]

I’ve read some things featuring Hap and Leonard before but wouldn’t say that I’m a massive fan. That may about to change because I thoroughly enjoyed this book. The title is obviously a play on Of Mice and Men and Hap and Leonard’s relationship is very similar to the friendship explored in that book. However, they also remind me a lot Angel and Louis from John Connolly’s book. They’re my favourite secondary characters so this is a good thing. I enjoyed every tale in this collection. The best was the title story which was pretty dark and incredibly sad. I really need to read more of Hap and Leonard’s adventures if this book is an example of what they get up to.

Richard Dane has killed a man. He cannot unhear the firing of the gun or unsee the blood on his living room wall. But everybody in the small town of LaBorde, Texas knows Dane acted in self defense. Everybody except Ben Russel, the ex-con father of the small-time criminal who invaded Dane’s home.

When Russel comes looking for revenge against Dane’s family, the two are unexpectedly drawn into a conspiracy that conceals the vilest of crimes. Surrounded by police corruption, mafia deception, and underworld brutality, Dane, Russel, and eccentric PI Jim Bob Luke have discovered a game they may not survive.

I really enjoyed this book. I was hooked from the dramatic opening. The book is packed with twists and turns. I thought I knew where the plot was going and without warning everything is turned on its head when Dane realises certain things about the robbery and the police investigation don’t add up. The plot is compelling, dark and twisted: police corruption, bad guys versus good guys and snuff movies to name but a few. Cold in July ended up a lot of places I wasn’t expecting. The book is dark at times but there is also a lot of humour as well. I had a great time reading it. 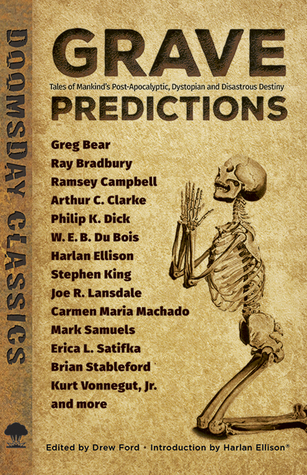 “This is a book of stories intended to describe that hand of mortal destruction in 16 utterly different, yet all apocalyptically stunning ways!” — Harlan Ellison, from the Introduction.

These compelling visions of post-apocalyptic societies and dystopian worlds include short stories by some of the most acclaimed authors of our time. Among the noteworthy contributors and their works are Stephen King’s “The End of the Whole Mess,” “The Pedestrian” by Ray Bradbury, and Arthur C. Clarke’s “No Morning After.”

The first-ever apocalyptic fantasy about global warming, “The End of the World,” appears here, in translation from Eugene Mouton’s 1872 French-language original. “The Pretence,” by Ramsey Campbell, questions the nature and structure of everyday life in the aftermath of a doomsday prediction. In addition, thought-provoking stories by Philip K. Dick, Kurt Vonnegut, Jr., Greg Bear, Erica L. Satifka, and others offer an end-of-the-world extravaganza for fans of science fiction, horror, and fantasy.

“These doomsday tales are highly original, thought provoking, and reality questioning. Recommended as a collection for fans of intriguing and eccentric sci-fi!” — Read Well

[Of all the questions that interest humankind, none is more worthy of research than that of the destiny of the planet we inhabit. (The End of the World by Eugene Mouton)]

I’m a fan of post-apocalyptic and dystopian fiction. There’s something I really enjoy about reading about the imagined mess our world could be in the future.

So of course, this anthology sounded like a treat.

Except it really wasn’t.

There are some great stories here. The Pedestrian by Ray Bradbury, I Have No Mouth and I Must Scream by Harlan Ellison and my personal favourite that I’ve read about fifty times, The End of The Whole Mess by Stephen King.

Some of the stories in Grave Predictions are good but many are regurgitated from similar anthologies and collection. Unfortunately, the book has nothing new to offer.

Connect with the author

I was given an ARC by the publisher and voluntarily reviewed it.

Hap Collins is a complicated man. He looks like a good ‘ol boy, but his politics don’t match. After way too many jobs, Hap has discovered what he’s best at: kicking ass. Vietnam veteran Leonard Pine is even more complicated: black, Republican, gay—and an occasional arsonist. As childhood friends and business associates, Hap and Leonard have a gift for the worst kind of trouble: East Texan trouble.

Joe R. Lansdale’s popular Texan crime-fighting duo is immortalized in this collection of new Hap and Leonard short stories and tall tales. Hap and Leonard: Blood and Lemonade follows the exploits of the early years of these beloved characters. Many of these intertwined stories appear for the very first time.

Leonard looked up from the newspaper he was reading, a little rag that was all that was left of our town paper, the bulk of it now being on line and glanced at me (PARABLE OF THE STICK)

I’ve never really read Lansdale’s work before other than the odd story. I have seen some of the Hap and Leonard TV series and thought it was mad and brilliant so wanted to read Blood and Lemonade.

This is my first time reading a mosaic novel. I had no idea such a thing existed. I really enjoyed Blood and Lemonade which is really a series of stories delving into the past of Hap with occasional forays into Leonard’s past. I liked the way the book is structured with flashbacks of the past triggered by places Hap and Leonard visit or people they encounter. This works really well. I enjoyed all of the individual tales and how well they worked together. However, as I’ve not read anything about Hap and Leonard before I felt like something was missing or I missed something and didn’t get as much from Blood and Lemonade as a proper fan would. Nevertheless, I enjoyed Blood and Lemonade enough to read more of the author especially Hap and Leonard’s adventures. My favourite tales were Not Our Kind, Down by the Riverside, Blood Lemonade and The River of the Dead. The other stories were good but these appealed to me a bit more.